DT 500 ZINE: – DAMEHT guys, my pleasure to meet you all. It was the reopening of the Clayton Gallery & Outlaw Art Museum. What was your part in it?

DAMEHT: – We were blessed enough to be able to work and live alongside Clayton after many years of idolizing him.

DT 500 ZINE: – Can you explain more about how this kind of blessing works?

DAMEHT: – We needed to do this show with him – it was the next step. We went through his archive and collaborated together – not in a way that we manipulated his work, but mainly in helping rerelease these Caps, which were a Downtown staple for a while. He had already achieved a level of success with them in the ’90s, but then he stopped when he pivoted more into activism. It was a desire to wear the Caps that drove us. And now we get to share them with other people.

DAMEHT: – Clayton embodied in his designs what many people strive – to be themselves even in hard times – as an oppressive force behind him which tried to push him out from remaining true to himself.

“…it was the normal way an artist was enjoying his credibility in an original manner of L.E.S. community in the ’80s…before the great gentrification…”

– says Clayton Patterson about his Caps production in one of his interviews.

It is essential to note the range of Clayton Caps, each designed after styles the artist embroidered and sold from his home during the ’80s. Featuring iconic checker cab motifs and variations of Patterson’s cartoon devil, DAMEHT’s Clayton Caps aim to bring attention back to one of N.Y.C.’s most unsung style innovators—a man whose signature all-around designs revolutionized the baseball cap and attracted everyone from Keith Haring to Matt Dillon.

Publishing in the G.Q. Magazine’s article by Richard Merkin named Clayton Hats as one of the two best baseball hats made in America. Many used to remember some of Clayton Hats’ essential customers included artists Jim Dine and David Hockney, actor Matt Dillon, directors Gus Van Sant and Rob Reiner, the Pet Shop Boys, and Mick Jagger, for whom they designed a custom jacket back piece.

DAMEHT: – Now, in 2016, with the reissue, it’s not about the money because none of us really come from it. We don’t know what that even means. We’ve been doing this for years with no return. This is just our time for giving- our work has been returned by Clayton’s generosity in working with us and the love we have around us with each other. 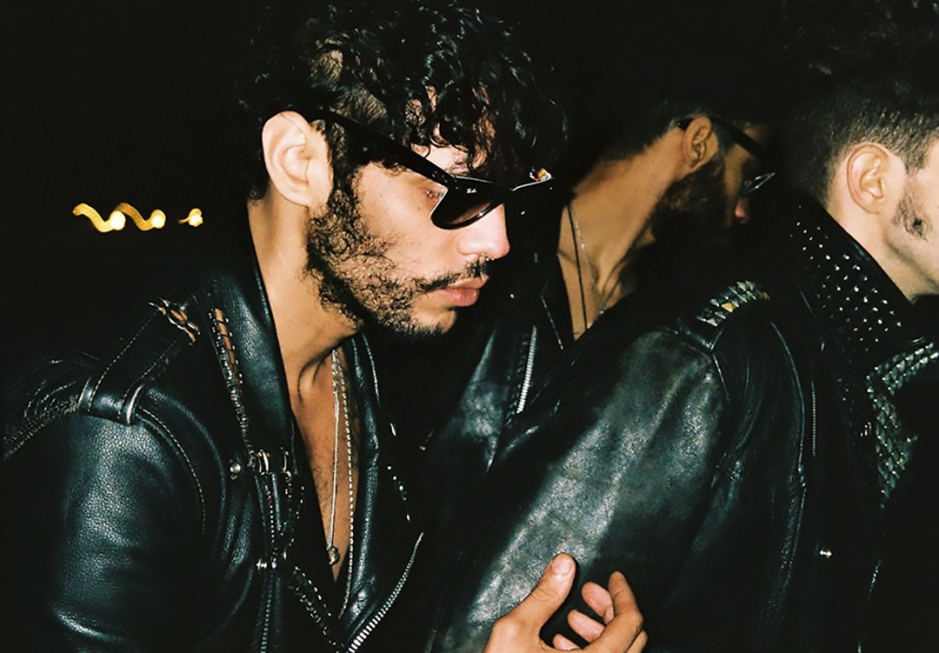 DAMEHT: – He’s the role model – and the ability to not just meet him but be part of his history is something he has allowed us to be part of.

“It’s confused in a sense – what is Clayton, what is DAMEHT – it is one group of people sharing an idea, crosses generations, races and our view of the future and how to move forward from here.”

It will take time to acknowledge the greatness of Patterson’s collection of photography, video, art, press clippings, and books comprise a vast Lower East Side history archive. The collection includes approximately half a million print photos, hundreds of thousands of digital images, thousands of hours of videotape in multiple formats and numerous artworks by Mr Patterson and his wife, Mrs Rensaa, as well as other New York artists. The archive also consists of various ephemera from the streets of New York City, including brand-stamped glassine heroin bags, protest banners and fliers, graffiti stickers and art. Controversially some of his documentary material was banned by NYC Court and not allowed to be exhibited…

DT500 ZINE: – What is the difference between DAMEHT and other bands in the same genre?

DAMEHT: – We have a fantastic team around us, not just the three of us in creativity and management, and Clayton Patterson – it’s a magic crucible.

“We’re not just working on the music – photography, video, aesthetic that translates from how we dress to how we present the content. It’s more of a “lifestyle package,” but it exists because we live it. “

DAMEHT: – DAMEHT came as a symbol to us, but it’s THE MAD backwards.

There is some gossip that DAMEHT did find the old drawing in Clayton’s archive that is actually a visual of DAMEHT’s logo on leather jackets. It was personalized by Clayton Patterson, who designed the matching “Tiberius” logo on each member’s leather jacket. “Tiberius,” which resembles a mythical three-headed cat, is who the band equally attributes its successes too and blames its calamities on. 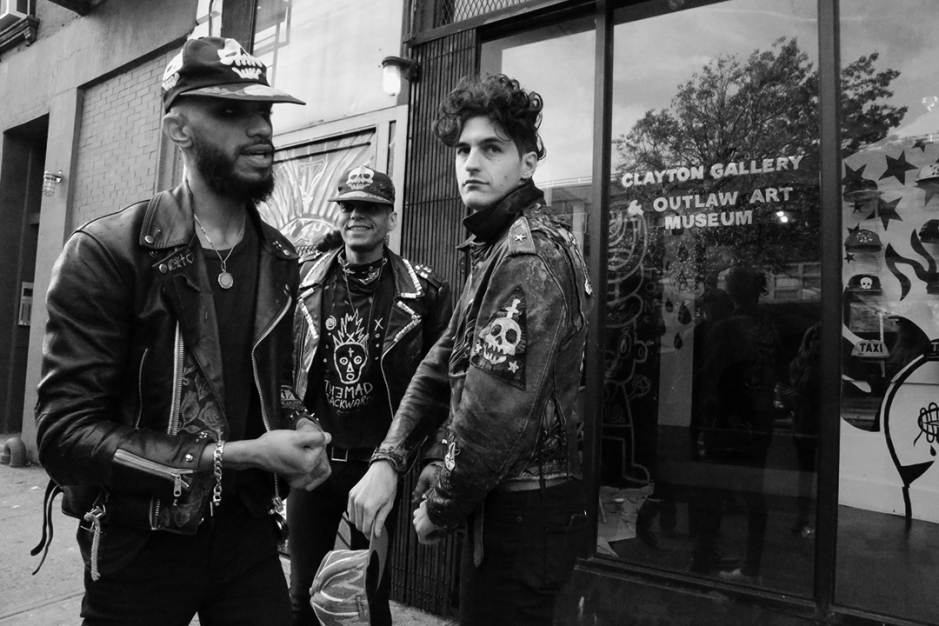 DT 500 ZINE: – What is new to your concept today vs other current talents?

DAMEHT: – A new is us even having all of this and wearing it, putting in on and out. The way we are presenting it is in this format, with a band.

” Clayton had “the conversation” already. We are just quoting it and have other things to say.”

DAMEHT: – Clayton brought an excellent aesthetic. When we came to him, we needed to solidify the aesthetic – we had the music, concepts, and visuals, and he tied it all together with the first collaboration, Triberus, and now, beyond.

” Clayton is to us what Warhol was for the Velvet Underground. We want to connect people and create a conversation for everyone who wants to participate. “

DT 500 ZINE: – Wherever you are playing, what is valid with your listener? What kind of crew are they?

ALEJANDRO JODOROWSKY SAID, “SOMEONE AND SOMETHING Are DREAMING US. EMBRACE THE ILLUSION. LIVE!” THERE IS AN AUDIENCE WHO IS DREAMING ABOUT US AND ALLOWS US TO BE A PART OF THEM.

DT 500 ZINE: – How were you gathering “your people” together?

DAMEHT: – We’ve been gathering audiences through different mediums, music at our concerts, our art shows, our videos, and visuals. The people who find us through Clayton and the Caps, the shoe collaboration with George Cox, and people who have only seen us through Facebook. It’s building on many different fronts, but it’s hard to consolidate it into one group at this point.

DT 500 ZINE: – I would love to learn more about your agendas?

DAMEHT: – Content-wise – what is the most important thing we can say to the world? – More than a message, it’s more a need to relate, trying to bring our words and stories within a relatable context or narrative. There’s not a lot on YouTube, but we’re telling our story in a different way than a lot of people. It’s a natural and evolving process.

DAMEHT: – To Trust Life. We do it all the time and face the same exact reasons why people stop working on their projects and dreams every day, and these things eventually reveal themselves as helping us where we need to go.

“It’s all done with love towards whoever is watching and listening – we are with them. And if they are with us, we are together in DAMEHT.”

” A new video for their single “Creeper Creeper”, and it’s a campy blast. Taking cultural hints from Steve Strange, Soo the Cat Woman, and New Romanticism, the video is a visual treat and an appropriate ode to a band known best for their secret shows.”

DT 500 ZINE: – Tell us more about your new record, ‘Creeper Creeper’? Why did you choose that kind of creative direction?

DAMEHT: – It indeed suggested itself. That song came with that idea and respect for the record. We started the record in Los Angeles, and the song indicated the art direction. The reference to Pamela Rooke (Jordan) was an archetype for punk rock. This title that’s been following us – “there it is” – comes in all our insecurities. Indeed they are usually the sweetest and most vulnerable people – it’s not as dark as when it’s in a suit-and-tie. She comes in as an archetype to us – who are not punk – and dances with us.

(*To renounce the girl, her real name is Pamela Rooke, also known as Jordan. She is a British punk legend. She was a model and actress noted for her work with Vivienne Westwood and the SEX boutique in the King’s Road area of London in the mid-1970s and for being a fixture at many of the early Sex Pistols performances. She was also known for her style and dress sense—a bleached platinum blonde bouffant hairdo with dark raccoon-like eye makeup—made her an unmistakable icon of the London punk subculture.)

Along with Johnny Rotten, Soo Catwoman and Siouxsie Sioux, she is credited with creating the W10 London’s Punk Royalties. Jordan is the most significant London punk queen and became one of the most outrageous and sussed Punkettes on the London Scene. Legendary Sex Pistols’ own Johnny Rotten wouldn’t go on that Scene if there were no Jordan around.

DAMEHT: – We mean well! One big inspiration was the film ‘Jubilee’ (that she stars). Within that film, they were all themselves. It was really how they were -perhaps that’s our movie, maybe that’s us. Much less about playing parts and more about being yourself as part of anything. You can’t script too far, remain yourself, and even if you fail at it, you come out with you, but just a little more of it.

DAMEHT: – Jordan represents everyone on the outside who desires to find their voice. Regarding the London punk scene, the world would lack particular individuality without that look.

DAMEHT: – In short, the search for individualism and staying true to yourself. Which is a reoccurring theme in our music and Clayton’s work?

“In the whole mix of it, it’s a sweet message.”

DT 500 ZINE: – Any good stories besides the record-making?

DAMEHT: – It was one of the most fun productions, involving many people.

DT500 ZINE: – Got drunk and crash something?

DAMEHT: – You’d expect that, right? But not really. Between a couple of liability issues… Ultimately, it was tough for us to make a video like that under normal circumstances. When we got the chance to do it, we had to get the best camera ever and time was on us, and we had to do it super professionally and diligently.

DT 500 ZINE: – I have heard tales about you making the video.

DAMEHT: – There are stories about that night, yeah– that video was really a party, it was our first party – those bottles weren’t a prop, everyone was wasted. We got cell phone videos from everyone and edited them together.

DAMEHT: – It was pure chaos but very well orchestrated. We threw a dance party, and it was our first performance. We thought, well, if we played the song twice and asked everyone to film, something would happen – and it did. In this case, in particular, it was pretty nailed.

DT 500 ZINE: – What is the last great impression you had?

” We are in the desert right now, so experiencing incredible sunsets. “ 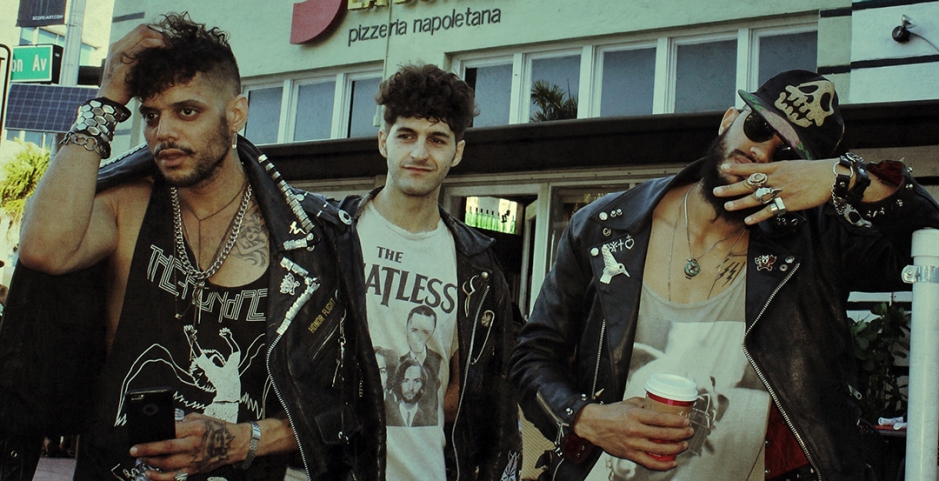 DAMEHT: – We didn’t have a particular premeditated thing. We came, and we stayed and got absorbed. We’re here, working, living our lives.

DAMEHT:– That’s old, and it was a hip-hop beef thing. Not to us now, not anymore.

DAMEHT: – The weather. We are living life the same way we did in New York.

DAMEHT: – In LA, we are preparing a single for January, followed by an EP in early Spring. We will play in LA in our warehouse Downtown, and we’ll use our website and social media to keep announcing what’s happening. The name of the EP is still a secret to us – let us know what it will be named!